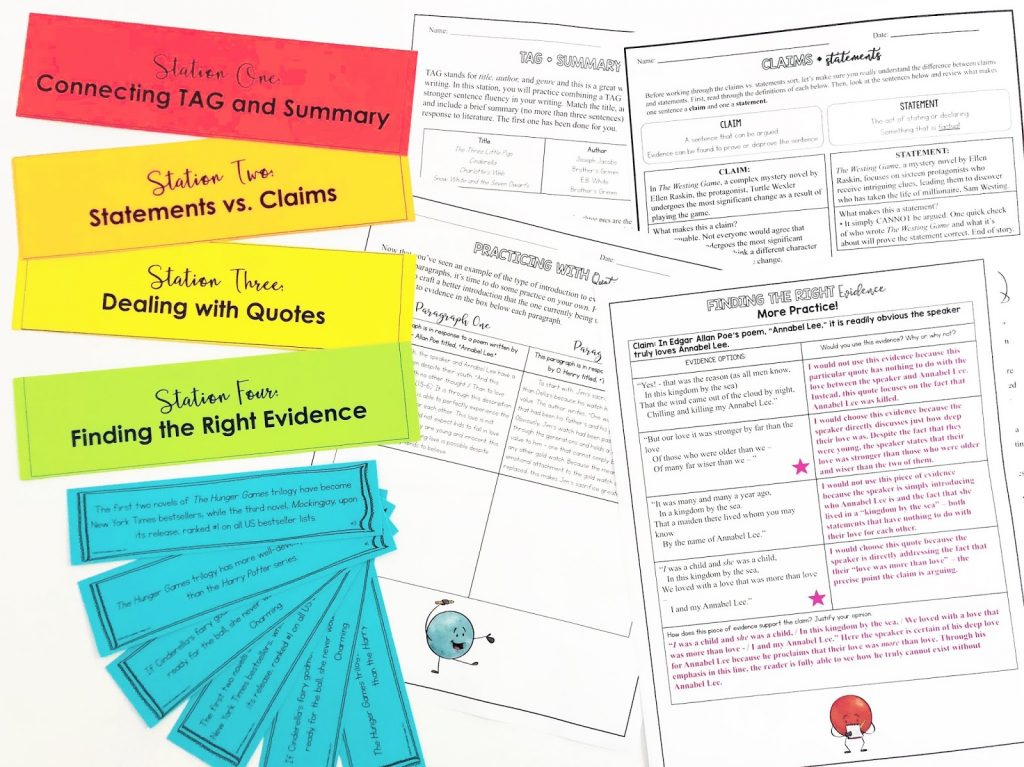 Learn how to take your literary analysis instruction and your students’ writing results to the next level by joining us for our FREE LIVE TRAINING! *Please note this live event has passed

Using writing stations in your middle school classroom can be a game changer in may ways. One of the most effective ways we have found to use writing stations is for reviewing concepts at the beginning of the year.

Adding a “Boot Camp” to our lesson plans for the week before a literary analysis unit was a serious game changer. We wanted our students to review some key writing concepts (specifically for writing a Response to Literature) from the previous year in an engaging and meaningful way, so we set up four stations. Each station allowed for review and practice, focusing on a key component of writing a Response to Literature.

Station One: Connecting a TAG (a statement that includes the title, author, and genre) with a Summary in a Response to Literature

While there is nothing wrong when students write a topic sentence with a TAG and a separate summary sentence in their introductory paragraph, we know they can become more fluent with some guidance. After participating in this station, we make it a requirement in their writing to combine the TAG and summary. Even they are impressed with how much more professional their writing sounds! The following is the example we show our students before they practice some on their own. 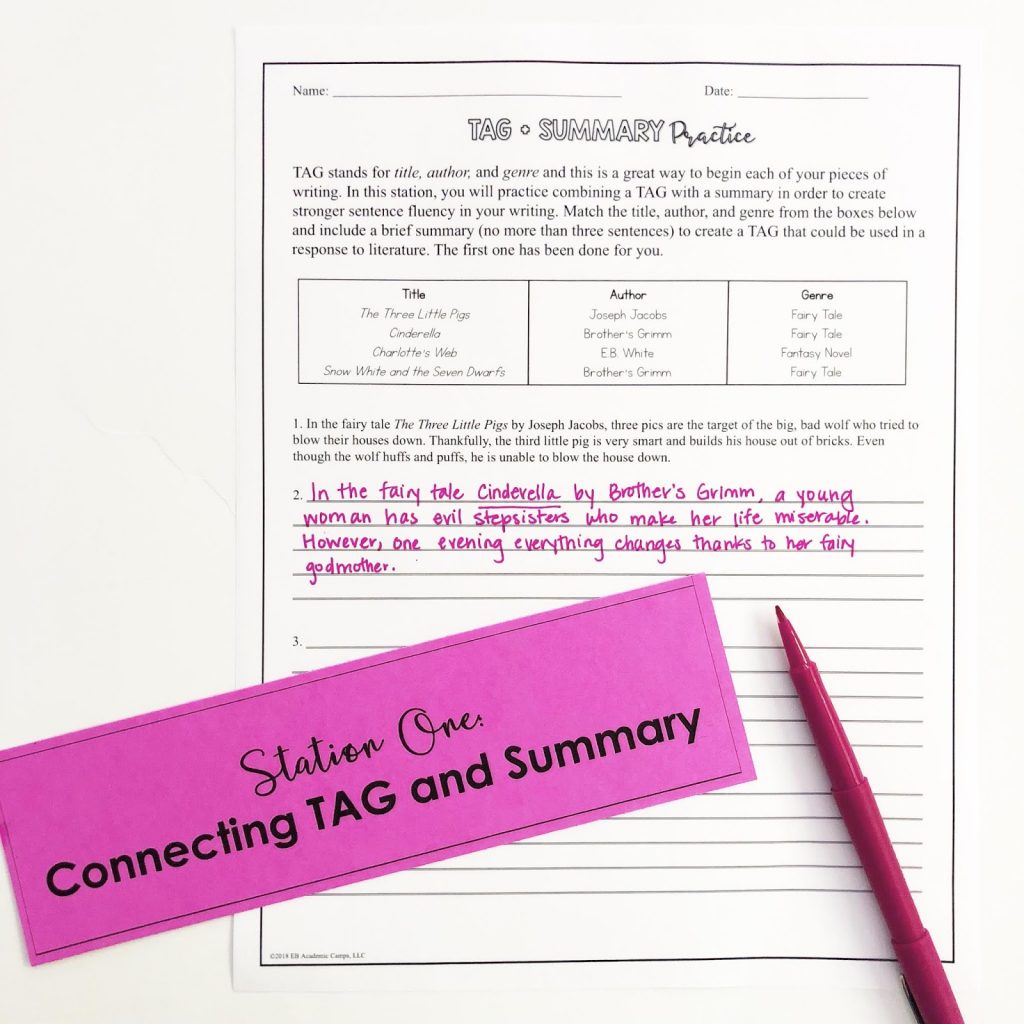 Station Two: Differentiating Between Statements and Claims (you can also read more about claims in this other blog post here)

Before we can expect students to write claims of their own in a Response to Literature, students need to know what a claim is. In this center, students review the definitions of statements and claims. Then, they work together to sort sentence strips into the appropriate column, either “Statements” or “Claims” and justify why they made their choice. This center is also nice to have on hand throughout the year if individual students need a bit more one-on-one practice. 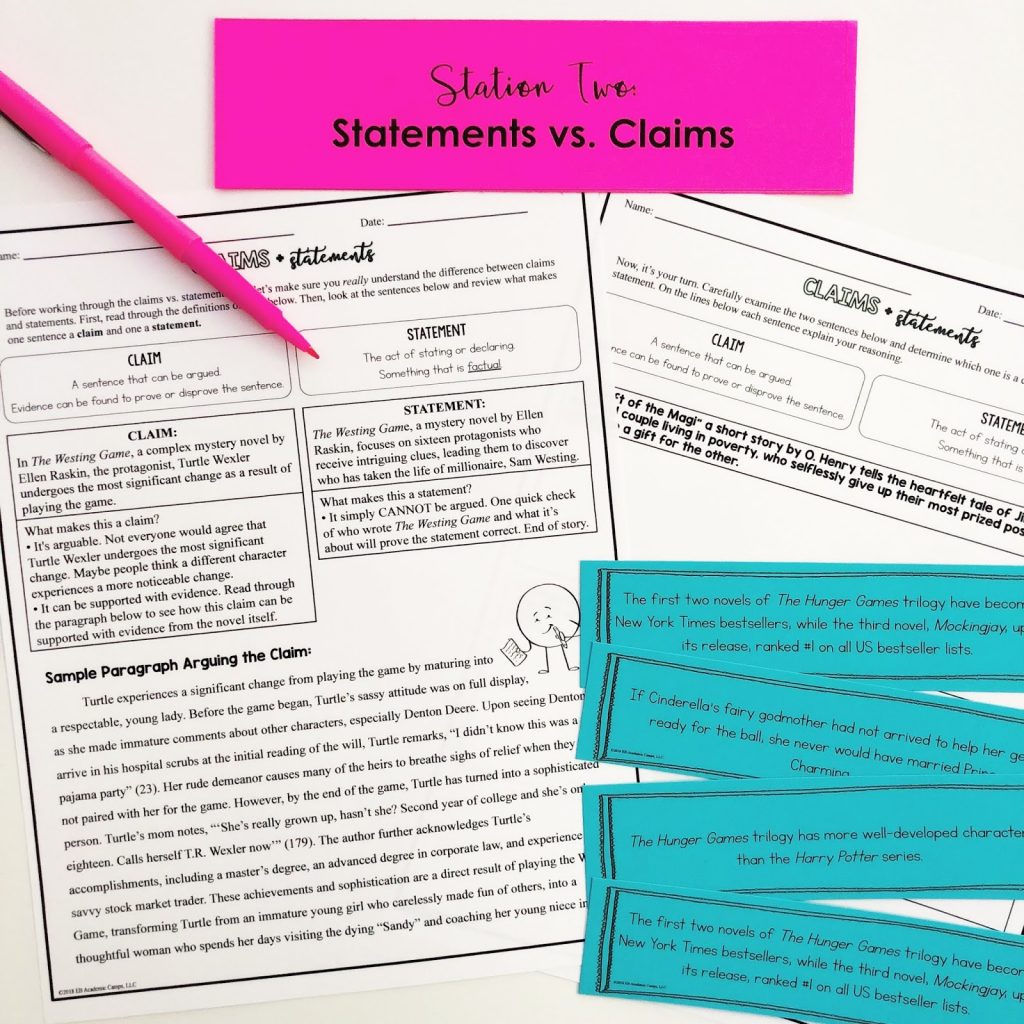 Station Three: Introducing and Citing Quotes in Responses to Literature

One of our writing pet peeves is when students simply drop a quote into the middle of a paragraph with little to no context. This station reviews how to properly “set the scene” before even writing, “The author states…” in a body paragraph. We stick with an example from Charlotte’s Web before students practice on their own. We show students the following two examples of a body paragraph for a Response to Literature, answering the prompt: “What qualities of a good friend does Charlotte demonstrate? We then discuss which paragraph does a better job of “setting the scene” before the evidence.

Students always point out that the first example is choppy and as a reader, you don’t know what part of the story is being referenced. The second example clearly orients the reader and flows seamlessly into the quote. Bonus: This is a great opportunity to discuss the justification in the body paragraph and what makes it strong. We then have students practice using some pre-selected quotes from stories they are familiar with. We have them set the scene, introduce the quote, and punctuate the quote properly. Going over this process and making it a non-negotiable in their writing process has resulted in more fluent evidence-based writing! We simply ask students, “Have you ‘set the scene’ for your quote whenever we are doing literary analysis, and inevitably, students go back and improve their writing. 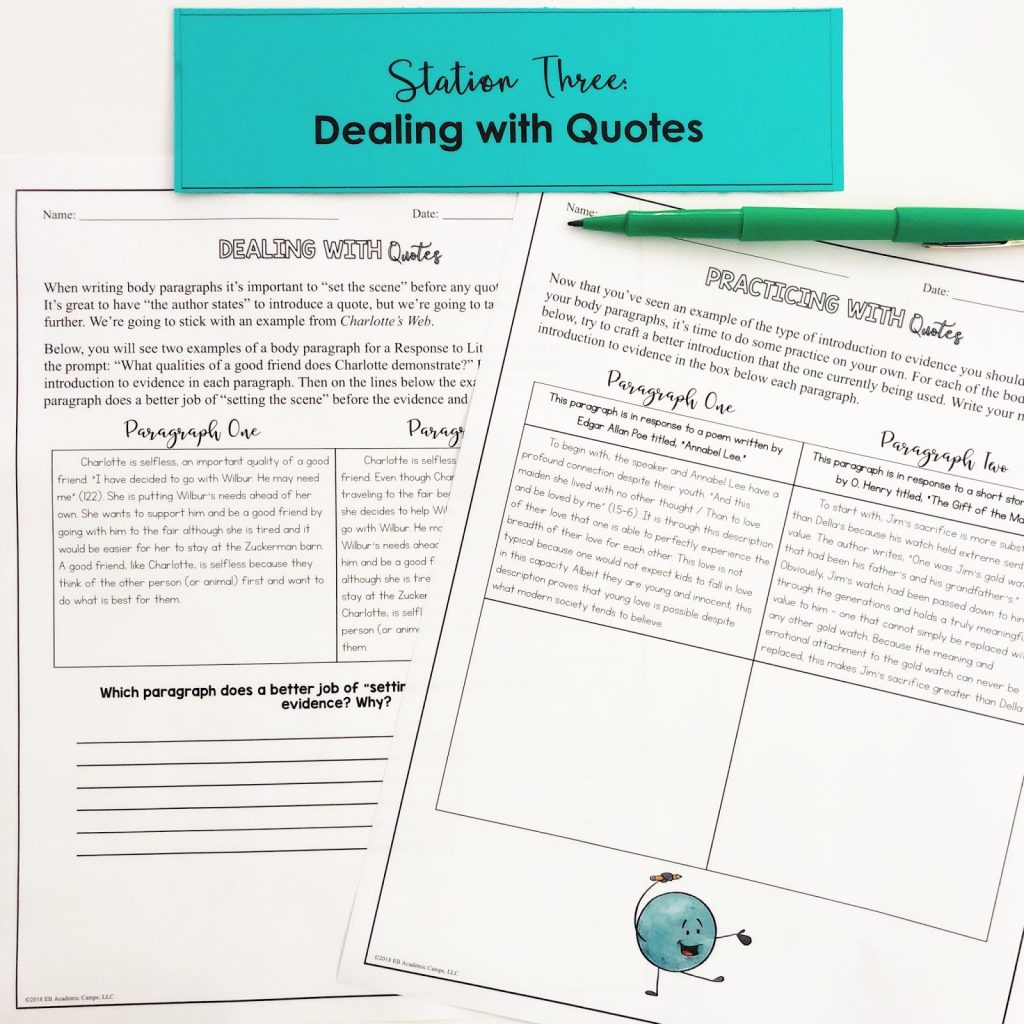 Even if students are fabulous at setting the scene and correctly punctuating their evidence with quotation marks and a page number, they’ve missed the crux of evidence-based writing if the evidence they’ve chosen doesn’t support their claim or premise (reason). This station walks students through a mini-lesson on selecting the most appropriate evidence to support a given claim. After reading a claim, we discuss four different options for a possible quote to be used with that claim. We critique each quote, asking ourselves, “How does this quote support the claim?” Then we see if we could create justification that would build upon the evidence. This exercise is a reminder to students not to simply choose any quote when we ask them for evidence, but rather be thoughtful and purposeful in their selection. 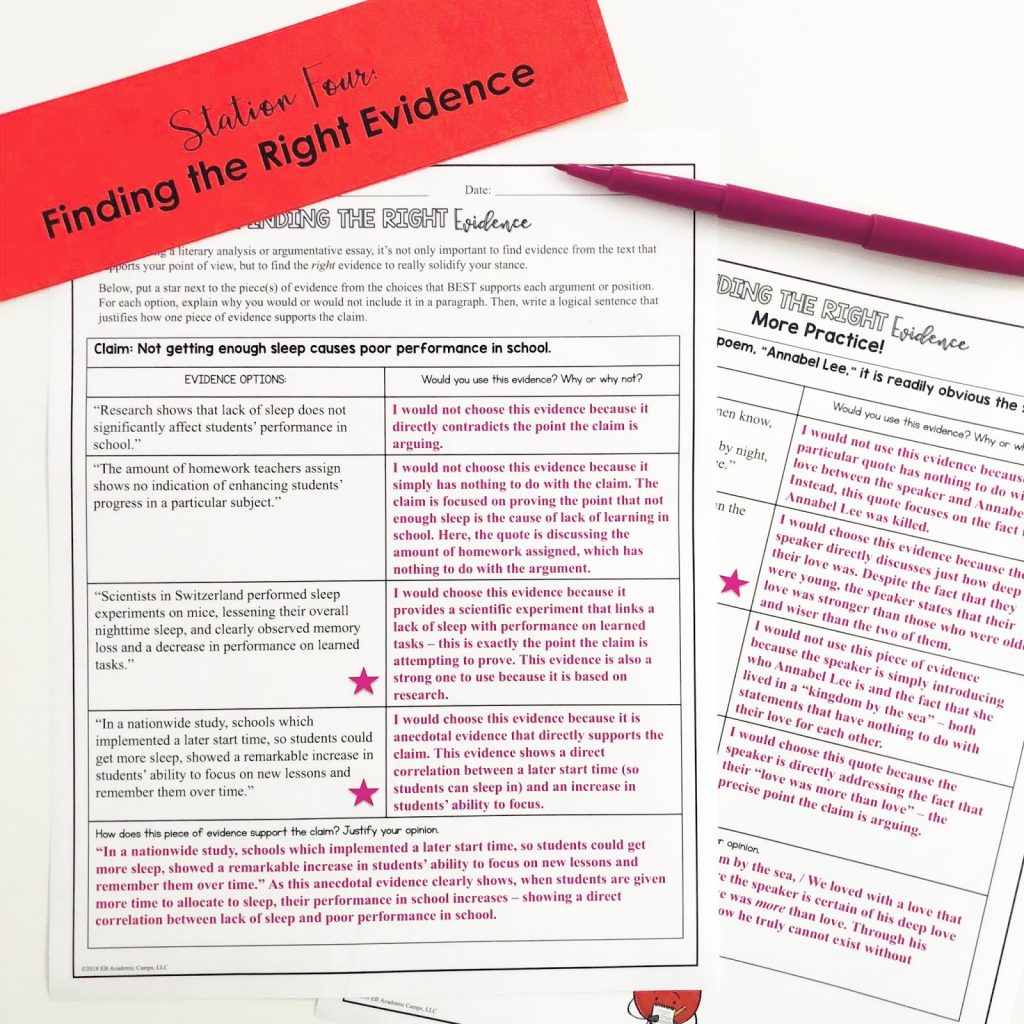 Students rotate through two stations each day (a silent reading station is also set up to allow for smaller groups), and once they have completed all the stations, any handouts are placed in the reference section of their ELA binders for reference throughout the year.

These stations are a great way to start the year to review key concepts from last year, but also to be used at any point throughout the year before you start a literary analysis or argumentative writing unit!
You can set these stations up yourself, but we’ve also already put an entire resource together for you to save you a ton of time 🙂 You can check out the resource here or by clicking the image below. Please feel free to let us know if you have any questions at all!
Want to learn more about joining The EB Writing Program or how to start the purchase order process for your school district? 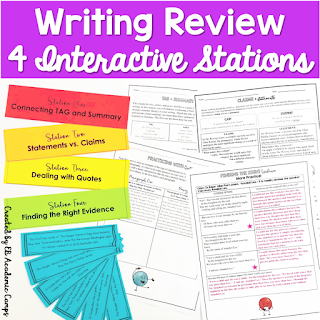 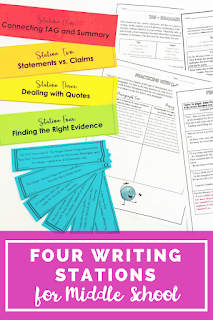 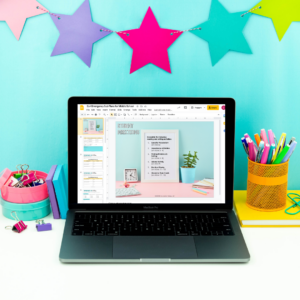 6 ELA Emergency Sub Plans that Work Virtually or In Person 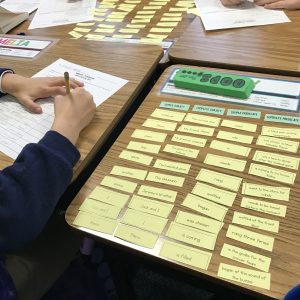 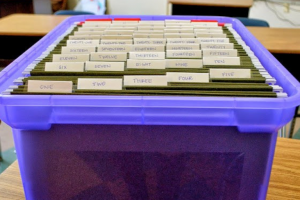 How to Collect and Pass Back Papers 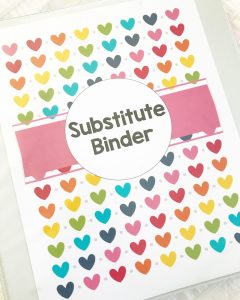 The Sub Binder: Why It’s Important & How to Set One Up