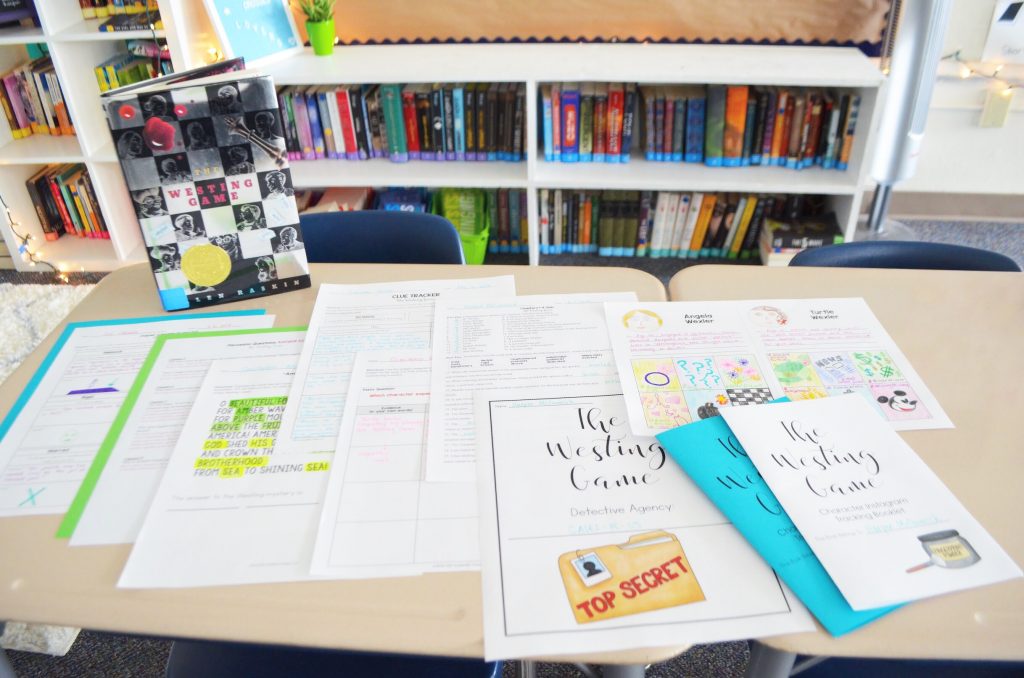 Jessica here with you today to talk all about my The Westing Game Lesson Plans!

Each year when I ask my students what the best assignment or unit was in Literature class, the majority of them identify our novel unit for The Westing Game by Ellen Raskin as their favorite!! It makes my teacher heart happy to hear because it’s my favorite, too!

So, in today’s post, I’m going to outline all of my The Westing Game Lesson Plans – and I mean, I am going to walk you through EXACTLY what I do with this novel … just in case you’re looking for a way to update your Westing Game unit or want to add it to your curriculum. So here we go…

From even before we start reading, I try to amp up the excitement about reading the novel/increase student buy-in, telling students that since we will be reading a mystery book, we will be forming detective agencies to help solve the numerous mysteries in the plot. Trust me. Middle School kids love this! As we read the book, we will focus on four main mysteries for students to solve:

The day we begin the novel, I put students into groups and let them come up with a name for their detective agency. I provide each of them with a “case book” for them to organize their notes as they work to solve the aforementioned mysteries. Since it’s such a complex novel, I include several graphic organizers in their case book.

What’s Included in the Case Books:

For mystery #1 (who took Westing’s life), I provide students with a clue tracker. Anytime, students come across something that is mysterious or seems like it might have something to do with Sam Westing’s death, they write it in their clue tracker. For example, students often write down, “There is no such person as Barney Northrup,” since it immediately sends up a red flag when they read this. I have them jot down the page number for any clue they write down. At the end of the novel, we go back and identify which clues were actually useful information to solving the mystery and which were just red herrings.

Figuring out who took Sam Westing’s life is such a central part of the whole novel that unless students are comprehending the basic plot, they will have trouble deciphering the nuances of each chapter. So, I also include comprehension questions for each chapter to help students remember significant plot points. I only give them a chapter or two of questions at a time since I don’t want to reveal anything important if students skim ahead to look at future questions (I made this mistake when I first started teaching the novel!).

Since there are 30 chapters in the novel, if I made students write out their answers for the comprehension questions for each chapter, they would quickly become bored. Instead, we switch it up. One week, they write out the questions using evidence from the text to support their answers, the next week, we do a quick think, pair, share, the following week, we do a mini Socratic seminar, the next week, small groups each present an answer to a question or two while the rest of the class takes notes. I truly believe my students would not grasp how awesome this novel is and all the hidden layers Ellen Raskin included if they did not use these comprehension questions!

For mystery #2 (the secret identities of the characters), I give students an Instagram Character Tracker. Since there are sixteen protagonists in the novel, students have a lot to keep track of. The Instagram Character Tracker allows them to sketch out a visual of the character, use images to show important qualities the characters exhibit, and come up with clever hashtags to help differentiate among the characters. I usually spend about 5-10 minutes at the end of each class period letting students write and draw in their character trackers, and it makes such a huge difference in their comprehension of the novel.

For mystery #3 (the message the clues reveal), I do two things, but only one is included in the case book. First, starting in Chapter 8 when the characters in the novel receive their clues, I pass out printed copies of the clues for my students. I take it a step further and form small groups to match the pairs in the story. For example, one group of kids will represent Angela and Sydelle and receive those characters’ clues and another group will represent Theo and Chris and receive their clues.

I give them class time to try and decipher their clues and they share out their findings with the class. This is always hilarious since the clues make absolutely no sense on their own, but students always come up with really clever possibilities and are adamant that they are on track to solving the mystery! After every group shares, I take all the clues and put them up on a bulletin board or whiteboard for the remainder of the novel unit.

I like students to be able to refer to them as they develop new theories about the novel. This year, my students were like little lawyers, getting up in front of the room each day and giving “closing arguments” to their case when they thought they had solved something big. The clues on the board helped them add depth to their arguments.

The second resource I provide my students for mystery #3 is the lyrics to “America the Beautiful” (I include this in students’ case books.) BUT, I only put these in the case books once my class figures out that all the clues put together, make up the lyrics to the song! (When I feel like they are getting close to this major discovery, I make sure to have the song ready to play. Then I let the kids work together to move the clues around on the bulletin board to reflect the order of the lyrics. They use the lyric handout I provide them for assistance.)

Students highlight all the clues on their lyric handout that match the clues on the board. We discuss how Sam Westing’s will stated, “it’s not what you have, but what you don’t have, that counts.” Students always think they’ve solved the mystery at this point, but hearing this reminder gets them all excited again that really, they’re just scratching the surface, and they still don’t know exactly what the clues point to.

This is always one of their favorite days of the unit. Each year, I have students literally jumping up and down and squealing with excitement when they start putting all the clues together!)

For mystery #4 (which character experiences the most significant change as a result of playing the Westing Game) I provide a few different graphic organizers. I know this isn’t really a mystery, but students are still trying to figure something out and justify it with evidence, so the reference works!

Prior to starting the novel, I inform students of our essential question: Which character experiences the most significant change as a result of playing the game? They will be writing a Response to Literature (multi-paragraph, evidence-based essay) at the conclusion of the novel unit that answers this question, so they will be searching for evidence as they read. Providing students with their essay question WAY in advance takes a lot of the pressure off since there’s no element of surprise.

While we occasionally refer to the essential question during class discussions, it really doesn’t take center stage until we finish the book. Then, I distribute an evidence tracker to students and have them break into small groups (depending on which character they believe changed the most) to search for evidence from the novel to support their theory. This evidence and justification become the crux of their final essay (the body paragraphs!).

I also give students a sample Response to Literature (RTL) to model their essay after (I do this with all literary analysis assignments) which has been a game-changer in terms of receiving higher quality work from them. When they write their essay, we use an RTL graphic organizer to ensure that evidence and justification are included in a logical and organized order.

You can read more about how I teach Literary Analysis to my students in this blog post.

The Other Stuff – Extra The Westing Game Lesson Plans Ideas

The Westing Game contains a lot of higher-level vocabulary, and it’s a great opportunity to encourage students to start using these words. When I teach this novel, I differentiate the vocabulary practice for students depending on how much support they need.

I use vocabulary graphic organizers (which I include in the case books), anchor charts, vocabulary skits, and vocabulary matching and sentence games on spellingcity.com (my school has an account).

I also give students a vocabulary quiz (along with comprehension questions) every few chapters to ensure students are grasping the material.

For my higher-level students, I often require the use of a vocabulary word or two in their written responses, especially their final Response to Literature.

There is also a film version of The Westing Game that is absolutely horrible, but I always show it to my students at the end of the unit. We all come to school dressed as characters from the novel (the year I got married, I came as Angela, in a modified wedding dress!) have a costume contest, and watch the movie while enjoying some popcorn. The kids love it!

We also spend one class period playing the board game Clue. Students who have the game at home bring it into school, and we break into small groups for some friendly competition. The game ties in perfectly to the novel!

I love that this unit has students so engaged that they beg to stay in at recess and keep reading or working on their clue trackers. If you teach the novel in your class or are interested in doing so, you can access all the activities mentioned above PLUS bonus content that can be used with any novel by clicking here!

This is the exact resource I use with my own students, and I have put in TONS of work to ensure that everything you need is included … from sample essays to answer keys to all the quizzes and comprehension questions to all the elements needed for a Clue Tracker bulletin board.

PrevPreviousEp 107: Finding Your Teacher Community Will Make You a Better Educator
NextEp 108: Why Your Writing Units Aren’t Giving Your Students the Results You Want (and What You Can Do About it)Next 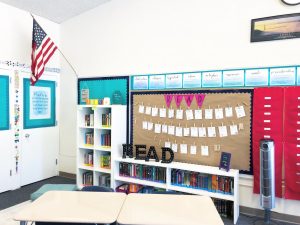 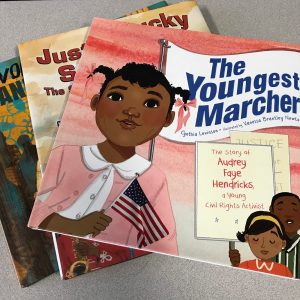 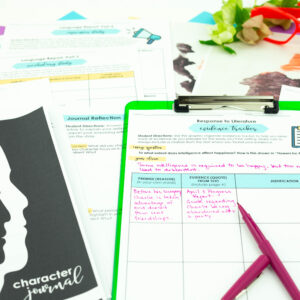 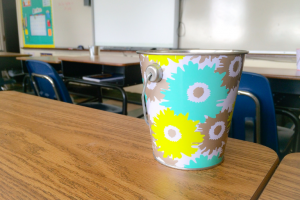